Why I joined Cresta 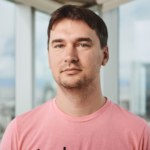 As the head of engineering at Cresta, I lead an amazingly talented and passionate team of Crestans who are committed to enabling every office worker to be 100x as effective through Expertise AI that uncovers and amplifies top performing behaviors during critical customer conversations. We are literally defining the next era of work and knowledge sharing, continuing the evolution of a practice that began long ago with colored pigments and a cave wall.

Cave paintings are found on the wall or ceilings of caves, and the term usually conjures thoughts of a prehistoric origin. In fact, the oldest known cave painting is a red hand stencil created by a Neanderthal in Maltravieso cave, Cáceres, Spain – a painting that has been dated to be over 64,000 years old.

Cave art has typically been considered by archeologists and other scientists as having symbolic and/or religious functions. While the specific meaning of each image is somewhat uncertain, one point is crystal clear: the intention was to share knowledge through a written, illustrative narrative.

Those cave art paintings were the first form of knowledge sharing and we’re still learning from those prehistoric drawings today.

I believe the next quantum leap forward is in Artificial Intelligence (AI) enabled technology, and Cresta is the transformational AI company leading the way.

I once spoke to a senior executive at Macy’s who said, “We are a technology company that happens to sell jeans.” That quote really struck a nerve for me.

The technological evolution of the enterprise

I once spoke to a senior executive at Macy’s who said, “We are a technology company that happens to sell jeans.” That quote really struck a nerve for me.

There’s no stopping now – the technology cycle continues to turn. Today, in 2021, enterprises are adopting AI to gain a competitive advantage. The reason I’m so excited about Cresta and the work it’s doing is that I firmly believe by 2030 companies will be adopting AI to remain relevant.

With AI, instead of needing people to write books, the books essentially write themselves by learning from the best.

A personal journey of learning and knowledge sharing

Over the years, I have developed a passion for learning and knowledge sharing in the interest of improving peoples’ lives. Through it, I’ve become aware that the rather traditional path of education through school systems, colleges and universities, and the like – while immensely valuable – is not scalable and repeatable for the majority of the world’s population.

Technology is, of course, the key to closing that knowledge gap.

My recent experience with both Udemy, the world’s largest online learning marketplace with a vision to empower anyone to learn anything, and HackerOne, a hacker-powered security platform empowering the world to build a safer internet, has convinced me of the power of distributed learning. After speaking with Zayd Enam, CEO and co-founder of Cresta, I have come to realize the relatively untapped power of AI in knowledge sharing. With AI, instead of needing people to write books, the books essentially write themselves by learning from the best.

The power of Cresta

Cresta’s Real-time Expertise AI shares knowledge and closes the gap between the best performers and everyone else. Our tagline is “Experts on Day One,” and we do so by uncovering expert behaviors from every customer conversation and amplifying them across teams using AI-powered real-time assistance. Today’s opportunity is to make a call center employee radically more productive and unlock her full potential. Tomorrow’s opportunity is closing the performance gap between the best and the rest for any knowledge worker.

Okay, so an AI-empowered solution might be poorly equipped to transform an average or below-average basketball player to be as good as LeBron James, but when it comes to a knowledge worker in today’s global economy, the potential is nearly unlimited.

I am in my first year at Cresta, and every day I’m excited to bring together world-renowned AI thought leaders, engineers and investors to transform your work as you know it. The next quantum leap in knowledge sharing is upon us, and I’m looking forward to helping Cresta leave its figurative mark on the cave.

About the writer: Alex Bekker is the head of engineering at Cresta, delivering AI-powered solutions to improve team performance in real time. You can connect with Alex on LinkedIn & Twitter.